Tucked away in a house in one of Rotterdam’s most iconic neighbourhoods, is a small but intriguing museum, the Chess Men Museum. The unusual, polygonal shape of the Cube House reflects the unusual collection that it holds: thousands of chess men lined up on table tops, in display cabinets and on shelves all across the walls.

Upon entering the Chess Men Museum, it is hard to know where to look, as it seems like every square inch of the space is claimed by a chess set, all neatly lined-up in battle formation. “We’ve had to add shelves to the display cabinets. They normally only have four layers, but we doubled that because our collection has grown so much over the years,” says founder Ridder Dijkshoorn.

The museum currently counts 928 unique sets; nearly 30,000 individual pieces. A record number, as Dijkshoorn explains: “We are in the process of getting our collection added to the Guinness Book of World Records. The only issue is that they require every set to be complete, including the original chessboard, which we don’t have in the majority of cases.”

There is an impressive range of sets on display, including depictions of famous historical battles, sets with fictional characters from fairytales and pieces shaped like abstract art. “We have 19th century hand-carved  sets made from ivory as well as modern sets based on comic books and television series such as Lucky Luke, Snoopy, The Simpsons and even South Park,” says Dijkshoorn. 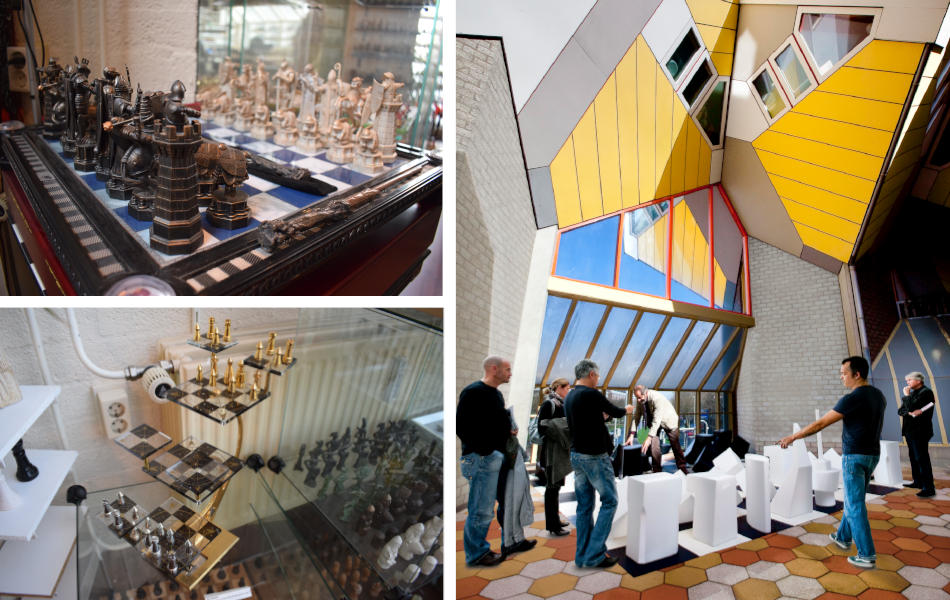 Top left: A chess set based on the Harry Potter movie. Bottom left:The 3D chess set from Star Trek that was made popular by The Big Bang Theory. Right: The Chess Men Museum is inside one of the iconic Rotterdam Cube Houses. Photo: Linda Zoon

The chess pieces hail from all over the world and are made from all imaginable materials, from wood to ivory, plastic, metal, glass, fabric and more. On top of that, Dijkshoorn also has an impressive collection of handmade sets. Every year, he holds a competition for (amateur) designers to create their own set.

The winner from 2019, which was announced on 1 January, was a set made from clay featuring am exotic-looking zeal of zebras against a tower of giraffes. Another striking entry, which came third, was Student chess, completely made out of beer-bottle caps. The entries for the 2020 competition will be revealed on 7 March (Museum Night 010) and visitors can vote on their favourite set for the rest of the year.

Ironically, Dijkshoorn is not much of a chess player himself. “I find the game fascinating, but I don’t really play.” Regardless, there are always a few sets at the museum that are ready to be played. “Because of the popularity of the standard Staunton chess set, many regular players actually dislike playing with unusual chess sets: they don’t recognise which piece is what. It’s the amateurs who are more open to playing with some of our unfamiliar sets.”

The Chess Men Museum is open daily from 11 in the morning to five in the afternoon, and admission is two euros for adults and one euro for children (RotterdamPas and Museumjaarkaart holders go free). 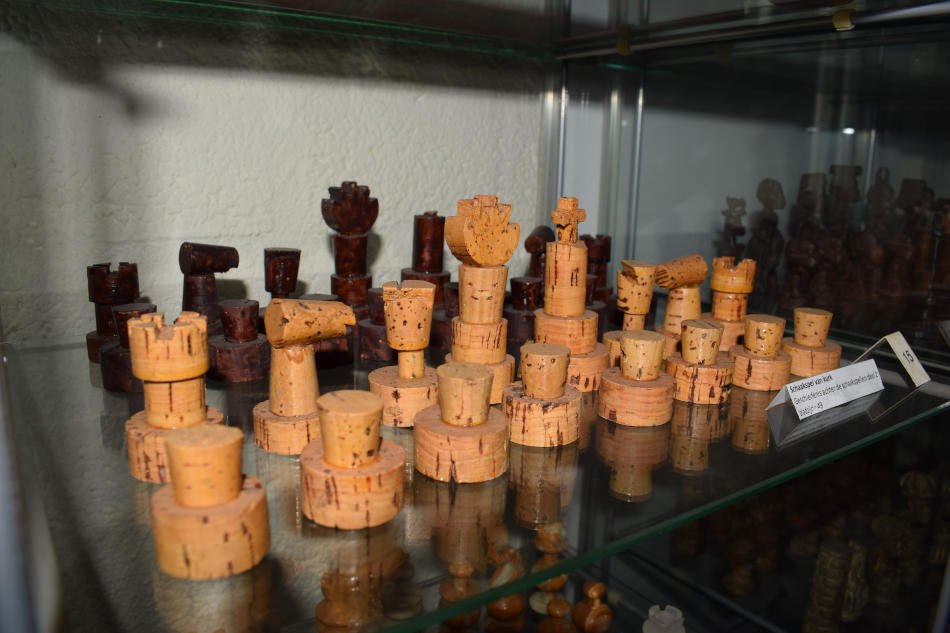 The handmade set from cork that took Dijkshoorn 30 years to obtain.

A most unusual find The most unusual set in the whole of the museum is a small, handmade set from cork. The delicate pieces are somewhat crude and visibly held together with glue. “What makes this set so unusual is its story,” starts Ridder Dijskhoorn of the Chess Men Museum in Rotterdam. “It was made by a patient in a psychiatric hospital in The Hague, where I worked as an assistant in the 1970s. When I heard it was for sale, I immediately wanted to buy it, only to find it was already gone by the time I had the money.” Only nearly 30 years later, when Dijkshoorn bought a dozen sets from a late collector called Mr Glotzbach, did he find himself to be the owner of the set. “I recognised it immediately. Plus, in his documentation he referred to the hospital as the place where he bought it, so this is that same set I wanted to buy all those years ago.” www.chessmenmuseum.com www.schaakstukkenmuseum.nl